Shock & Vibration of the Wrist in Different Sports

What type of shock and vibration environment does the human wrist experience when playing sports?

That is the exact question an engineering team would have to answer when developing a new smartwatch, for example. To do this they will need to first gather field data of people playing sports wearing an accelerometer recording system on their wrist. Then they will need to aggregate and summarize that data to quantify the vibration and shock environment by sport. And then, ultimately, they can define the worst-case environment the wrist and the smartwatch will have to endure.

With this information in hand (pun intended), the engineering team can reproduce the environment in the lab to quickly test and qualify prototypes.

This is exactly what we helped a customer do, and in this article I'll share the test data and results with interactive plots. Specifically, I'll cover:

To get the data we used an enDAQ sensor, specifically enDAQ's S4-R500D40, that includes several accelerometers and a gyroscope in a small and robust package with a battery and local data storage. We used a cellphone armband to strap the sensor to our wrist. A picture of the setup is shown below. 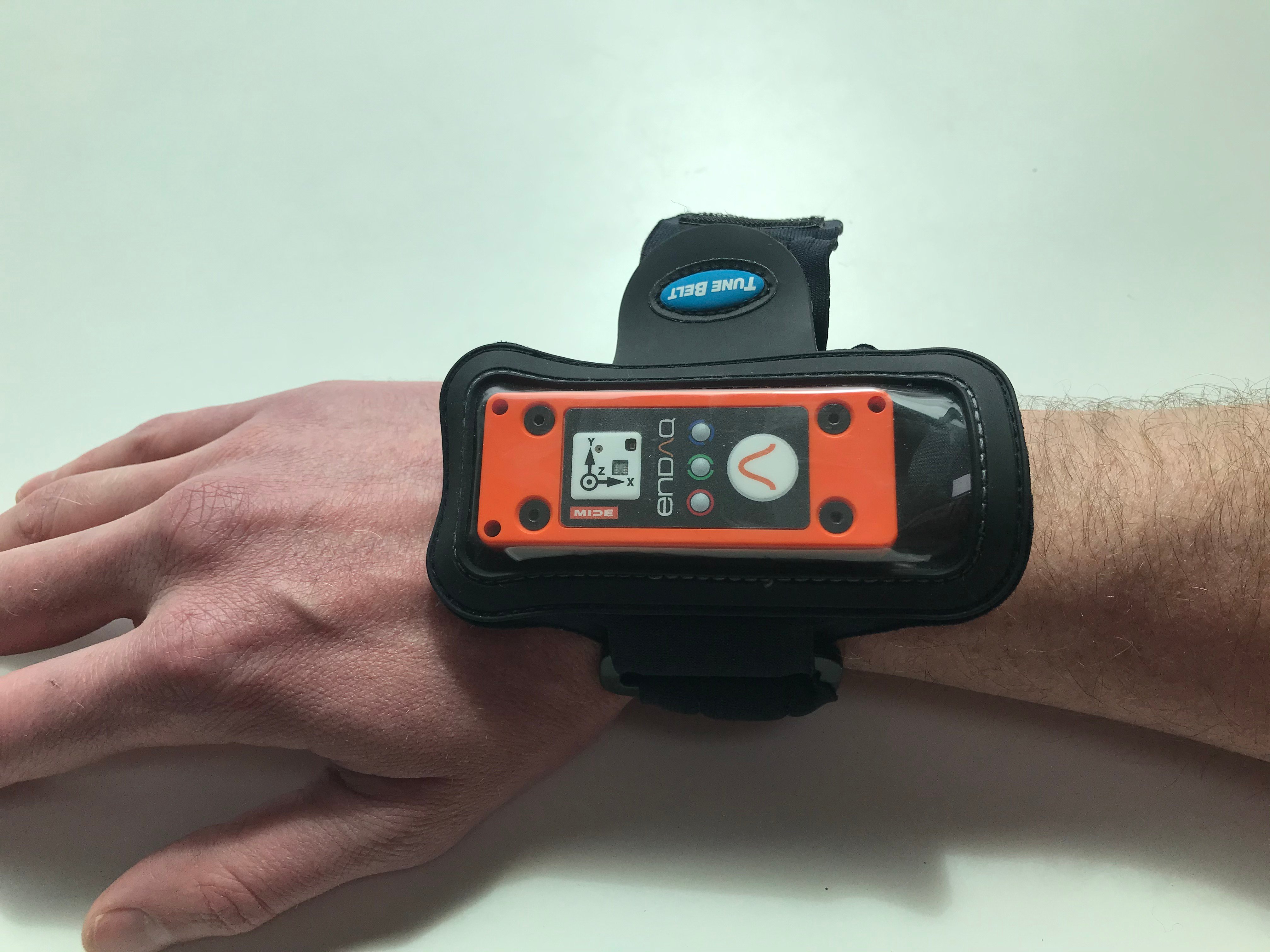 Once we set up the sensor (which only took a minute) we were ready to go with the fun part of testing! We played over an hour of 15 different sports to get a good sampling of what the wrist experiences. Here are some videos!

If you thought getting the data was fun, my favorite part is analyzing the data!

There was A LOT of raw data captured: we recorded over 60 minutes with sampling of 20,000 samples per second per axis. This means there were over 200 million samples. All of this data was processed, but below I pulled out the worst event in three of the sports:

Please zoom around and interact with the above plot! When you do there should be two things you'll notice:

Now that we have the raw data and looked at a bit of the time history, we can start summarizing these events into quantifiable shock and vibration metrics.

Our blog on the top vibration metrics to monitor highlighted the need to quantify raw vibration data into a handful of metrics that can be compared to other events and monitored. I've reduced this list to the 4 most relevant metrics for our application below and compared the results for each sport.

One thing that should jump out (and I hinted to this when looking at the raw data) was that there is little correlation between peak acceleration to the other metrics. The metrics most relevant to damage potential are the peak pseudo velocity (see our shock response spectrum article) and acceleration RMS. And believe it or not, throwing a baseball is the harshest sport that electronics on the wrist would have to endure - even harsher than hammering a nail!

This is because the event has a much longer acceleration pulse width which allows for more energy to build up. It's also because we have a wannabe major league pitcher on our staff who was throwing heat!

Remember we had A LOT of data to go through. So we took the resultant shock response spectrum for every test for every sport, then found the worst case per sport and plotted them all together. One of the nice things about the response spectrums are that you can easily convert between acceleration and velocity so we displayed both. Again, these are interactive with a legend at the bottom for you to isolate different sports -- play around with it!

A few things to draw from the response spectrums:

If we are designing an electronics system for the wrist, we'll want to make sure that the internal resonances are all above about 100 Hz to get to the point where the peak pseudo velocity falls below 100 in/s which is our "damage potential threshold." The stiffer, the better in this application and environment!

Below is the worst-case power spectral density per sport for the resultant. Also included is the cumulative RMS which can be conveniently calculated off the PSD. Notice how these values match up pretty closely with the overall RMS we calculated earlier. The only reason for the discrepancy is that I stopped the PSD at 500 Hz and there is a little bit of higher frequency energy still left (very little though!). Remember these are interactive plots, so scroll to the bottom and isolate one sport or the other and notice this correlation between the PSD and RMS values.

Other than the frequency content, the other conclusion we can draw from this data is that running (repeated motion of the arms) and baseball throwing/catching has the most vibration energy.

Now we aren't necessarily worried about reproducing the experience of throwing a baseball directly in the lab. We want to reproduce the worst-case scenario across all sports to ensure our system can survive everything we'll throw at it (too much with the pun?). So what do we do?

We find the maximum at every frequency in the power spectral density and shock response spectrum. Then we can summarize it further to make it easy to program test equipment to reproduce.

You can see the half sine pulse with a 127g peak amplitude and a 0.021 second pulse width has a shock response spectrum which pretty nicely envelops and tracks our worst case conditions, with the exception of the frequency range between 20 and 50 Hz. So although the half-sine is convenient, be aware that we will be over-testing our device slightly. But some safety factor isn't always a bad thing!

Now that we have the half-sine, it may be interesting to compare it to the raw time history data we have of our three most severe sports. Remember this half sine has to envelop ALL sports. It ends up not having a pulse width as wide as the baseball throw, but it has a pretty wide one nonetheless and a relatively high peak compared to the raw data. But this is what we need to be matching the worst-case across all sports and frequencies!

Now let's take a look at our power spectral density. Again, we will get the envelope for all frequencies for all sports to have a worst-case PSD. But this is still a bit too granular than we may like and would be tedious to enter into a shaker control software. So instead we can elect for an octave spaced PSD with some pretty big jumps, making each frequency be 4x the last (or 2/1 octave). See our post on "How to Develop a Vibration Test Standard PSD" for more.

This results in just a handful of break points and is easy to enter into a shaker control software. It also tracks the overall RMS levels so it doesn't cheat anywhere! The only time this may be a bad idea is if we have one or two very pronounced sine tones because the octave spacing will make these more broadband as you can see at some of the higher frequencies.

Below is a full test report we provided to our end customer who was looking to develop an electronic device for the human wrist. This test report (like the blog) includes a lot of interactive plots! It also includes all the source code that was used to generate these plots. If you'd like to see a full-screen view of this report in a separate tab, click here. You can also download all the test data and code here too (careful, 400 MB!)!

To conclude our testing, let's focus on two areas:

How Bad Is It?

The vibrations the wrist sees are pretty weak for the most part, especially at high frequencies. This may not be true if we were to get some motorcycle data, but even still -- we see that the fleshiness of our human bodies does a lot to dampen high-frequency vibrations.

Shock results were a little higher and something to worry about if we are developing a system with a natural frequency below 100 Hz or so. But it should be achievable in our development to ensure the system is stiff enough. Also of note here is that the impact sports we think of being potentially damaging to the wrist don't produce very intense shock events when measuring something that would sit on the wrist. Inside the body, this may not be true though where our bones and ligaments are likely doing a lot of good work at absorbing that energy.

Getting data is made pretty easy with enDAQ's devices; but processing all of this data can be time-consuming. That's why enDAQ also provides a cloud-based analysis software to aggregate and summarize large amounts of raw shock & vibration data into a single-page test report. And these reports can be completely customized by the end-user with their own code (or ask enDAQ to help!). And below is a custom test report built off all this data that can be emailed to colleagues when providing a user name and password, or you can opt to download the plot data too!

Please don’t hesitate to leave a comment or contact us directly with any questions you may have on this topic or others. We are here to help you with all your testing needs!