The PyroShock-Acceleration-Offset-Error Problem: A Proposed Solution

You have performed an essential (perhaps single-opportunity) test and taken the measurements you need to assess the specimen’s performance.

Is the data good… and useful?

How do we evaluate the validity of the data? We know that all experiments have measurement errors. Some data sets are worse than others. Some may simply be bad and should be discarded. Others may have errors/biases that can be “fixed."

In many instances, an experienced investigator can assess data quality by “eyeball."

Goofy signals are often obvious from the time history. Others require a more discerning test.

If the data is “essentially correct in our view," can we make “adjustments” to improve its validity and usefulness. What does “adjustment” mean? Is it cheating? What is “legitimate”?

Some “corrections” are straightforward. Removal of the measured DC offset from an AC-coupled transducer is an easily recognized correction that is routinely performed. High- and low-pass filtering may be used to remove frequency components that we don’t care about. Other strategies may not be so straightforward.

This post discusses a test that is not only difficult to perform but one in which eyeball data validity checking is not adequate. A more discerning test is required.

The problem is discussed and an “adjustment” to “compromised but basically good” data is proposed.

Responses from pyrotechnic events are notoriously hard to measure. These events are normally excited by explosives (Figure 1) but impacts can produce similar responses. The tests are very brief and may have high amplitude (thousands of Gs) and high frequency (up to 100 KHz) acceleration responses. They produce time histories like the one shown in Figure 2.

Examination of the signal by eye looks fine. In fact, it’s about as good as you can expect from a pyro test. But, it has a fatal error that makes normal analysis techniques (shock response spectrum (SRS) and energy-based analyses) fail. There is an offset of about 57G during the event. The offset is only 0.45% of the peak acceleration… a trivial error in most shock experiments.

The standard method of characterizing the damage potential of a shock waveform is the shock response spectrum (SRS).

When we perform an SRS analysis on the signal we get the result shown in Figure 3. 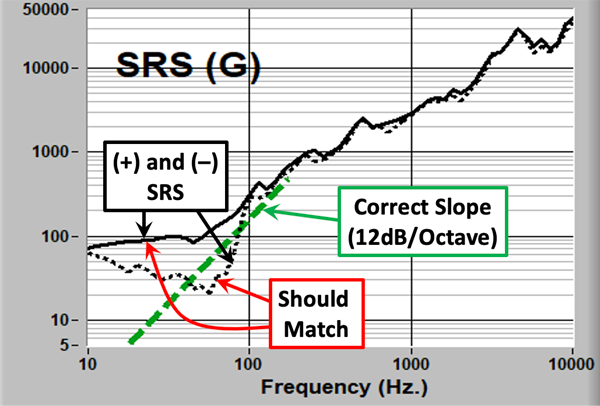 The SRS should have these characteristics:

The result shown obviously violates these criteria below 100 Hz. If we are interested in damage below that frequency this result is not acceptable.

The causes of these offsets have been discussed in Reference 1 and 2. The conclusion is that even when best practices are followed, the offsets occur because of non-idealities in the transducers and/or signal conditioning. The accelerometer and instrument vendors have done their best to reduce the effect, but it remains a significant problem.

The Use of Signal Velocity as a Data-Validity Test

Let’s look at the signal with a different analysis.

We integrate the signal in Figure 2 from acceleration to velocity and get the result shown in Figure 4.

The velocity trace indicates that our specimen is headed through the laboratory wall. This is probably not true!

Velocity has been used for shock-data-quality assessment in many laboratories largely because of its promotion by Alan Piersol (Ref 3). The IES Recommended practices (Ref 4) states that the velocity offset should be less than the shock oscillation level (sometimes called the Piersol Criterion). The data in Figure 4 obviously violates this rule. In fact, much of the shock data acquired over the years is in violation until (often dubious) processing is done.

Note: The processes described here assume that the test article is at the same velocity (zero) at the beginning and end of the test. This is the case for many, but not all, shock tests. For example, for a drop test, where the specimen has an initial velocity but is stationary at the end, the processes described here would have to be modified to accommodate the different end conditions.

So, the velocity signal presents a very visible indication of the validity of shock data. The following discussion describes a technique that uses this velocity error to “correct” the problem.

It was developed for, and used in, the analysis of data acquired during a test series performed at National Test Systems (NTS), Santa Clarita in 2016 for PCB. A variety of commercially available shock accelerometers were subjected to high-level pyro events (Figure 5) and their responses were measured with a high-bandwidth, high-dynamic-range data acquisition system. The test series is described in Reference 5. The paper’s Appendix shows the results of all of the tests in plot form. Examination will show that almost all of the tests fail Piersol’s Criterion.

A Proposed Strategy to Reduce the Effects of the Errors

For this discussion, we won’t worry about the source of the error. We will accept the fact that the offset errors occur, look at the result, and suggest and demonstrate a technique to mitigate the problem.

Several methods have been proposed to reduce the effect of these experimental errors: High-pass filtering (Ref 6) and wavelet correction (Ref 7). These approaches have shown some success but are far from universally applicable. This paper proposes a third method based on the brute-force characterization and subtraction of measurement errors.

The strategy proposed is a refinement of the technique described in Reference 8. It uses the fact that we have a very good estimate of the indicated velocity after the dynamics have settled down and that we know that it should be very close to zero at the end of the test. The strategy is to do our best to characterize the error and subtract it from the signal.

We make the following assumptions:

The correction procedure is displayed in Figure 6: 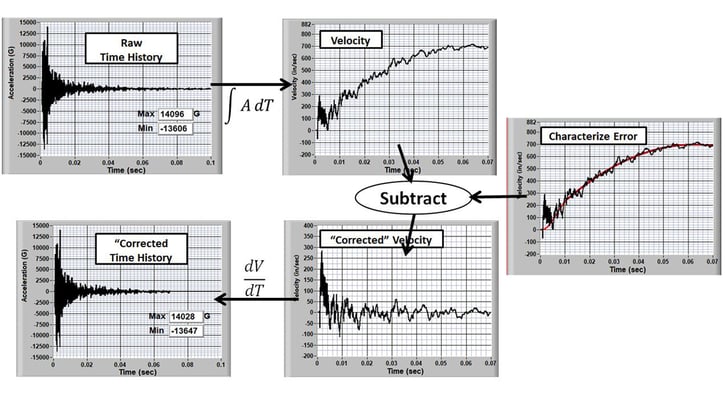 Of course, the challenge is to characterize the velocity error accurately. For the strategy suggested here, an error-characterization curve, made up of three parts, is used:

Figure 7 shows the correction for the full analysis time period. Details of the correction curve are shown in the expanded view of the shock period in Figure 8.

Figure 8: Expanded View in the Region of the Shock

The “tuning” parameters are:

The primary objective is to optimize the velocity and SRS errors at low frequency. Care must be taken to not compromise the high-frequency result.

This tuning results on the SRS shown in Figure 9. It can be seen that:

Obviously, the success of the correction depends on the tuning of the parameters. However, setting the cubic-spline range to cover most of the primary shock duration will usually work well.

Application of the Strategy to Several Data Sets

The results shown in the discussion above are from a PCB 350B01 (Test 4, Channel 4) mechanically isolated, electrically filtered (MIEF-IEPE) piezoelectric device that was analytically processed with a 2-pole, 2 Hz. high-pass filter.

Figure 10 shows the results from a PCB 350D02 (MIEF-EPE). The acceleration amplitudes are similar, but the velocity characteristic is significantly different: starting out positive and then going negative. Again, after appropriate adjustment, the correction is good.

On the other hand, the tool can make bad data look good. Figure 11 shows the results for a known bad channel (intermittent electrical connection). Despite the fact that the raw velocity shows suspicious behavior that is not obvious in the acceleration, appropriate (?) tuning makes it look good.

This process should offend any purists in the audience. However, if used judiciously, its success in making significantly flawed (but “good”) data usable should justify the means.

A software program that you can use to examine and manipulate a provided data set can be downloaded from Shock Correction (click to download Installer -- it will install immediately). It is an installable executable that will run on PCs.

For an overview of how to use this software, you can check out the following video and the Shock Correction Program Manual. You can also download an example data file.

I hope you find this software useful, but please remember that it is, at this stage, simply a free tool for you to play with to correct shock-offset errors. Please contact me for feedback or any issues on the contact form that can be found here. Or, leave a comment below.

Strether Smith has no official connection to Mide or enDAQ, a product line of Mide, and does not endorse Mide’s, or any other vendor’s, product unless it is expressly discussed in his blog posts.

I'm looking for new ways to create some dialog on modern/advanced methods for data acquisition and structural-dynamic system analysis. I have a lot of experience (good and bad) to share and think posting as a guest on the enDAQ blog is a perfect venue to help reach and educate engineers interested in these areas.