How do we summarize shock analysis in less than 1 sentence? Don't pay attention to peak acceleration, instead focus on the pseudo velocity shock spectrum (PVSS). Now for a bit more: in the video above, I provide a 5 minute (or close to it!) overview on shock analysis, and below I'll keep it short and sweet. For a deeper dive, see our related post: Shock Analysis: Response Spectrum (SRS), Pseudo Velocity & Severity.

To summarize shock analysis, let's answer the question on how we would compare different shock events?

Then we'll conclude by making that comparison with a PVSS which effectively does all of the above in one plot!

In the Time Domain

Let's look at real shock data (which can be freely downloaded) from the following 5 events:

Plotting them all in the time domain is shown below, but we can see how dissimilar the events are which makes the comparison difficult!

If you must compare shock data in the time domain, low-pass filtering is your friend! Here is the raw data from the motorcycle crash.

Now here is that same data with different low pass filters. Trust us (or check out our other post) that these filters didn't remove important acceleration peak information (reduced from 130g to 70g!). When doing shock testing you are generally worried about potential damage and therefore energy becomes the concern. We know kinetic energy is equal to 1/2 * mass * velocity2. Note how acceleration isn't in there! This velocity is the area under the curve of the acceleration data.

Takeaways from the time domain:

The shock response spectrum (SRS) calculates and defines how a single degree-of-freedom system with different hypothetical natural frequencies would respond to the shock.

First, here is the acceleration response in the time domain to the motorcycle crash input for three different natural frequencies: 10 Hz, 100 Hz, and 1 kHz. And we've called out the peak acceleration in each one of those frequencies experiences.

The acceleration shock response spectrum will loop through many frequencies to calculate and plot these responses. We can see which frequencies are isolating the input and which are amplifying it and use that to inform our design decisions.

Now we do the same with the relative displacement between an input pulse and the response of a system.

Takeaways from the response spectrum: 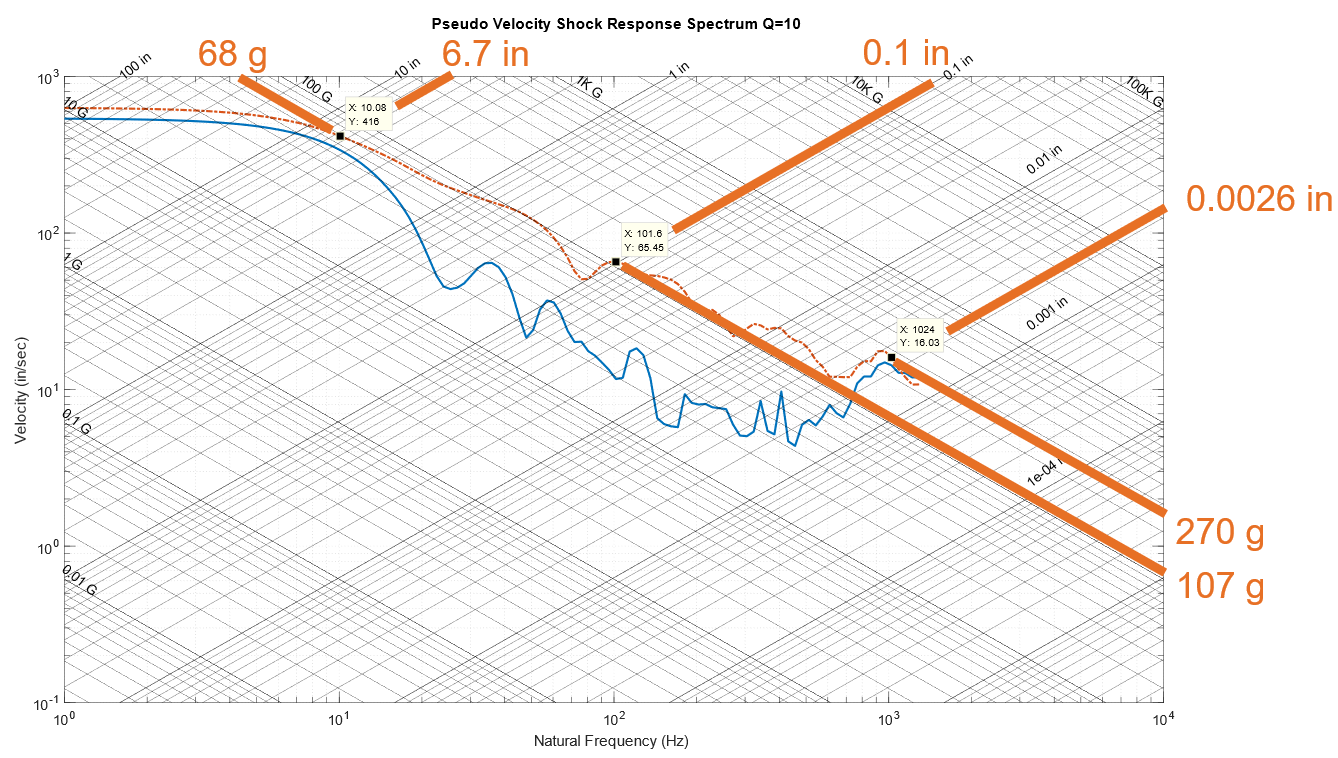 Because of this linear relationship between relative displacement, pseudo velocity, and approximated acceleration, we can use diagonal lines to show the other metrics on the one plot!

Below is a comparison of the pseudo velocity shock spectrum (PVSS) for different levels of damping. As damping is reduced, that plateau in the PVSS starts to approach 677 in/s.

Now here is taking that raw acceleration data and integrating it to get the velocity change from impact. Notice how the final velocity change is within 1% of the plateau from the PVSS!

What is a Severe Shock?

The energy in a shock event is the area under the curve. Stress is proportional to modal velocity, not g's or acceleration. From equation 16 in Gaberson's paper: 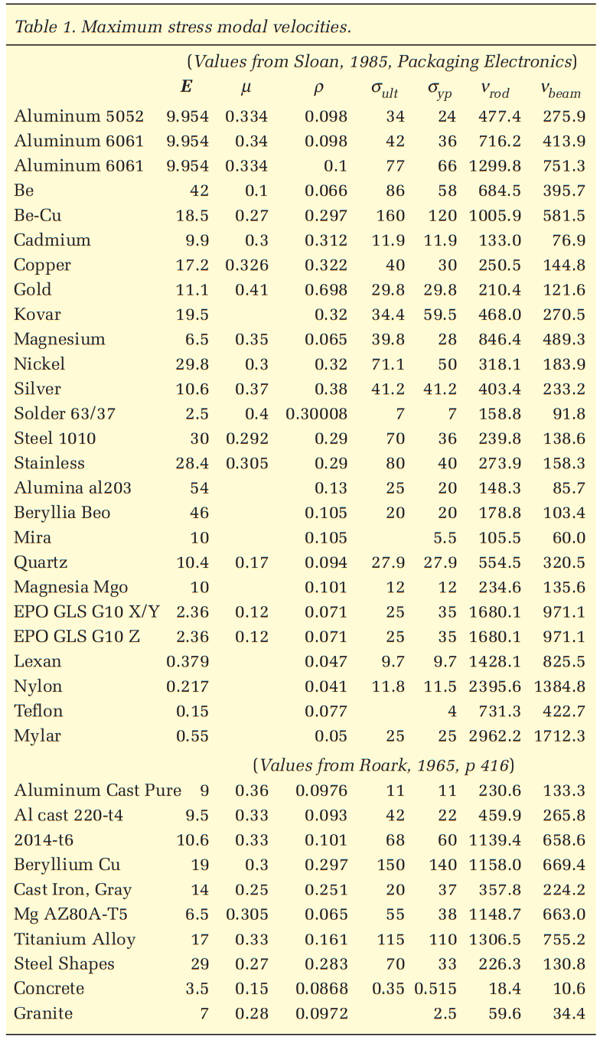 Notice how there is a velocity value for each material at which it starts yielding and some of these approach 100 inches per second (ips) in the case of steel.

In addition to Gaberson and others, we've seen military standards (such as MIL-STD-810E and SMC-TR-06-11) specify shock severity in terms of velocity. In general the 100 inch per second (ips) threshold for pseudo velocity is used in industry as that threshold for defining a "severe" shock. This severity can be summarized in the following rule-of-thumb gauge. 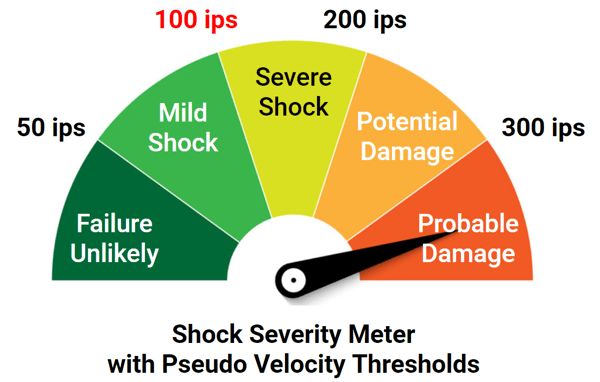 Comparison of Events with PVSS 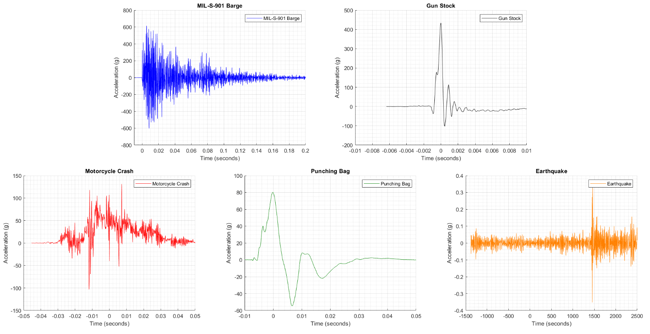 So let's get to the main event and calculate and compare the pseudo velocity comparison of these events, which you can see in a simple and clean single plot.

All of these events are "severe" shocks or greater, surpassing the 100 ips pseudo velocity threshold. But believe it or not, the earthquake is the most severe logging a maximum pseudo velocity of about 1,000 in/s! Yet, the maximum acceleration amplitude in the time domain was 0.3g. Clearly, "max g" or peak acceleration is a misleading way to characterize a shock event. And it shouldn't be all that surprising when we remind ourselves that earthquakes are capable of toppling buildings.

If there can be two things to take away from this post:

Expanding upon why pseudo velocity is the best!  There are a few advantages:

But don't just take me at my word, download the data used in this post or go measure your own data and do your own analysis!

Please don’t hesitate to leave a comment or contact us directly with any questions you may have on this topic or others. We are here to help you with all your testing needs!