Understanding the Basics of Fourier Transforms 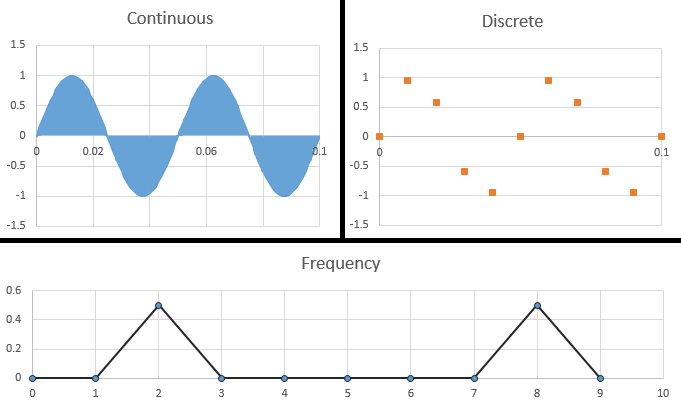 Complex numbers have a magnitude:

A key property of complex numbers is called Euler’s formula, which states:

This exponential representation is very common with the Fourier transform. Note that an imaginary number of the format R + jI can be written as Aejξ where A is the magnitude and ξ is the angle.

The Fourier transform is defined by the equation

And the inverse is

A lot of engineers use omega because it is used in transfer functions, but here we are just looking at frequency. If we use the angular frequency instead of frequency, then we would have to apply a factor of 2π to either the transform or the inverse. The general rule is that the unit of the Fourier transform variable is the inverse of the original function’s variable.

Let’s kick these equations around a bit. Let’s try the super simple function x(t) = 2. Plugging this equation into the Fourier transform, we get:

Integrals around infinity start to behave oddly, so this example will not be mathematically rigorous, but intuitively we can see that the integral of sin(ξt) and cos(ξt) as t goes from negative infinity to positive infinity should be 0, unless ξ = 0. At that point the equation simplified dramatically to:

We can write the equation for X(ξ) using the Dirac delta function, δ(x), which is defined as:

Now let’s look at the Fourier transform of a sine wave of frequency 1kHz.

We can see that this is going to come to zero except for the case where ξ=±1000. At that point, using ξ=1000 for this example, the equation becomes:

Using the Dirac function, we see that the Fourier transform of a 1kHz sine wave is:

We can use the same methods to take the Fourier transform of cos(4000πt), and get:

The Fourier transform of the product of two signals is the convolution of the two signals, which is noted by an asterix (*), and defined as:

This is a bit complicated, so let’s try this out. We’ll take the Fourier transform of cos(1000πt)cos(3000πt). We know the transform of a cosine, so we can use convolution to see that we should get:

A long equation, but since δ(x) = 0 where x ≠0, we can see that there are only a few spots where we get non-zero answers. For example, in the first term we have:

How to  Use the Discrete Fourier Transform

The discrete Fourier transform (DFT) is the most direct way to apply the Fourier transform. To use it, you just sample some data points, apply the equation, and analyze the results. Sampling a signal takes it from the continuous time domain into discrete time. Here, I’ll use square brackets, [], instead of parentheses, (), to show discrete vs continuous time functions. The input to a discrete function must be a whole number. Sampling a signal x(t) at sample period Ts will turn it into x[n] such that:

So a sine wave of frequency fs = 1kHz sampled at Ts = 10uS will become:

A common form of the DFT equation is

As we expect, the sum of a sine and cosine over the whole period equals 0. We can assume that all other values of m will similarly be 0, so, similar to the time domain example, we have:

To get the actual signal magnitude we need to divide by N.

Let’s make things more complicated and take the DFT of the following signal, using 10 points sampled at 100 uS:

Running this through the DFT equation will get us the following values:

As we expect, the two sine waves show up clearly, although their magnitude needs to be normalized by the number of samples taken. We can find the frequency of the signals using the mfs/N equation, using fs = 1/100 uS = 10kHz, and N = 10, so m=1 corresponds to 1kHz, m=4 is 4kHz, m=6 is 6kHz, and m=9 is 9kHz.  These high frequency results are really ghost images, similar to how we saw sine and cosine waves showing up at positive and negative frequencies. This also serves to illustrate the problem of aliasing, where higher signals above fs/2 appear as lower frequency signals. Just as out 1 kHz signal shows up at 9kHz, a 9kHz signal can show up at 1kHz. The second half of a DFT is generally left off because it tends to not contain any new information. This post will leave it in because it does help to illustrate some points.

Next, let’s try taking more samples with the same signals. If we keep the signal frequencies and sample rate the same, but increase the number of samples from 10 to 20, we get parameters of:

So far, so good! The discrete Fourier transform has a few complexities, but it should all look familiar based on our understanding of the continuous time Fourier transform. In my next post, I’ll get into leakage, which is what happens when the signal, number of samples, and sample frequency all start to drift apart, and how we can solve that.

Check out my latest blog: Frequency Leakage in Fourier Transforms.