Light Sensors: Units, Uses, and How They Work

Light sensors seem pretty simple. They sense the light, just like a thermometer senses the temperature, and a speedometer senses speed. Temperature and speed are easy to comprehend because we sense them in a straight-forward way. But light is very complicated. Temperature and speed are intensive properties, so they don’t depend on the mass or size of an object.  Light can be measured as an extensive property, meaning the total light collected depends on the size of the collector (e.g. a landfill solar array collects more light than a tiny solar phone charger), or intensively by dividing by the area.

Before we can properly understand light sensors and how to apply them, we need to be able to quantify light. Unfortunately, measurement of light uses some strange units. For example, lightbulbs are usually rated using lumens, but light sensors typically take measurements in lux. On top of that, both lumens and lux are based on an arcane base unit called the candela.

This unit is used to describe luminous intensity, which is how strong light appears to a human eye. It is based on an SI-official formula that weights every wavelength of light in a beam based on how sensitive the human eye is to it. The higher the luminous intensity of a beam of light, the more sensitive the human eye is to it. (Candelas were formerly known as “candles”, and the luminous intensity of a normal candle is approximately one candela. Clever, right?) The reason candelas are not used to compare lightbulbs and flashlights is that the intensity of a beam depends not just on the output of the bulb, but also how much of that output is concentrated in a particular direction. Most flashlights use mirrors behind the bulb to concentrate more light in the output direction and therefore appear brighter. This means that the bulb has increased intensity in a direction, while using the same amount of power and emitting the same total amount of light. To properly measure the output of a bulb, we need a new unit: the lumen.

The lumen is used to measure the total luminous flux of a light bulb. This is the product of the luminous intensity (in candelas) and the solid angle that the beam fills (in steradians). A bulb emitting light in all directions might have a luminous intensity of 10 candelas, which when multiplied by the full 4π steradians would have a luminous flux of 126 lumens. Like inside a flashlight, a mirror on one side of the bulb would make the other side appear brighter due to the reflection of half of the bulb’s output. The intensity of the light would double to 20 candelas, but the solid angle would halve to 2π steradians. Multiplying the intensity of the light opposite the mirror and the new solid angle would still give 126 lumens of luminous flux. No matter how the light is reflected and concentrated, this bulb will always produce 126 lumens of luminous flux.

If light bulbs are rated using lumens, why do light sensors have to use a different unit? It’s the reason musicians aren’t blinded at concerts. A single flashlight might seem blinding when shined an inch away from Drake’s eyes, but a sea of phone flashlights pointed at the stage isn’t bright at all. Because the light scatters as it leaves the phone, only a small amount of light hits his eyes on stage. As an object moves away from a light source, the share of the light that it receives also decreases. To properly measure the luminous flux as perceived by a surface, called illuminance, we use a unit called lux, which is equal to one lumen per square meter. At the same distance from a light source, a 1 square meter sheet is subjected to the same illuminance as a 10 square meter sheet. The larger sheet collects ten times as much light, if measuring luminous flux in lumens, but its area is just as large, so the illuminance is the same. If the sheets move toward the light source, the solid angle occupied by each the sheet increases, and therefore the illuminance also increases. The intensity of the light is constant, and the area of the sheets is constant, but the solid angle occupied increases, therefore increasing the illuminance they receive. Light sensors have to measure illuminance because it represents the light cast on a unit area, and because they cannot know what solid angle they occupy. 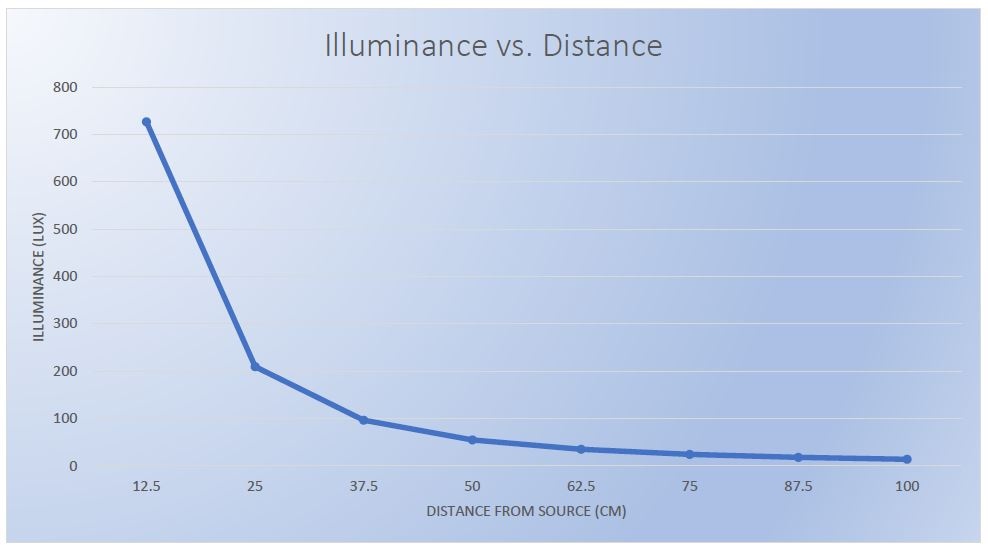 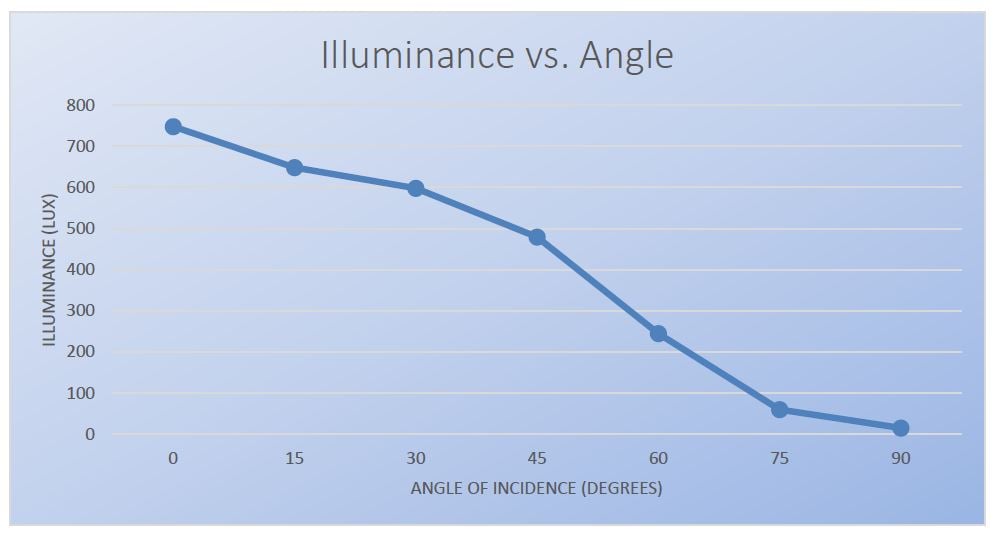 Light sensors have a lot of uses. The most common use in our daily lives is in cell phones and tablets. Most portable personal electronics now have ambient light sensors used to adjust brightness. If the device can sense that it is in a dark place, it turns down the screen brightness to save power and not surprise the user with a very bright screen.

Another commonplace use for light sensors is controlling automatic lights in automobiles and streetlamps. Using a light sensor to trigger a bulb when it is dark outside saves the slight hassle of turning on the lights and saves power in the day when the sun is bright enough.

There are many more uses than consumer convenience, however. Detecting intrusion into containers or rooms is an important security application. When shipping expensive cargo, it can be important to know when a shipping container has been opened, so that cases involving loss of product can be solved easier. A cheap photo-resistor could be used to log each time the container is opened, so it can be determined at what point in the process thieves raided the container, or if the sender was being dishonest and claimed the container must have been robbed.

While light sensors are the only products that can give meaningful data regarding light, many other goods are sensitive to light. For example, paintings and photographs on paper and older works of art can be damaged due to exposure to sunlight, so it is important to know how much light they are exposed to. When shipping a work of art, a light sensor could be used to verify that it was not left in the sun for too long.

A light sensor could also be used for siting the art to a permanent location. Areas near the entrance or windows of a museum could have sunlight too harsh for particular materials, so a light sensor could be used to locate art appropriately. This is similar to the method for siting solar arrays on homes or in fields. It makes no sense to build and install a solar panel in a certain spot if it won’t receive much direct sunlight, so a light sensor is used to find the best placement with the strongest direct sunlight. (As I mentioned, a solar panel is just a very large light sensor, but it’s easier to use a handheld device to test the sunlight than use the panel itself.)

Sunlight has important implications on agriculture, especially in the water-deprived American West. Different crops need different amounts of sunlight, so it is important to know which plots of land get the most exposure. As water supply becomes more strained in places like Utah, farmers have a financial and social obligation to limit water consumption, while also keeping their crops hydrated. One tactic being adopted is to water crops in the afternoon or evening, to avoid the hot sun cooking off the water before the soil and plants can properly absorb it. A light sensor could be used to manage a sprinkler system automatically, only watering when the sun is not at its brightest. When coupled with other weather-monitoring equipment to gather data regarding temperature, pressure, and humidity, a system could not only water when the sun is dim, but also intelligently detect oncoming rain or clouds to optimize its watering schedule.

Now that you understand the mess of units that quantify light, we can start to understand how illuminance is determined using light sensors.

Light sensors sometimes use a component called a photodiode to measure illuminance. When beams of light strike a photodiode, they have a tendency to knock electrons loose, causing an electric current to flow. The brighter the light, the stronger the electric current. The current can then be measured to return the illuminance of the light. If light-induced electric current sounds familiar, it is because this is the operating principle of the solar panels used to power road signs and homes. Solar panels are basically very big photodiode light sensors.

Another type of light sensor is the photo-resistor. A photo-resistor is light-dependent resistor, meaning that if there is a change in the brightness of the light shined on it, there will be a change in resistance. Photo-resistors are cheaper than photo-diodes, but are much less accurate, so they are mostly used to compare relative light levels or simply whether a light is on or off.

As mentioned earlier, light sensors (photo-resistors and photo-diodes) are versatile and not super expensive, so there are a lot of options out there, from basic components to highly-accurate data loggers.

One method for collecting illuminance data is using the usual small computing platforms like Arduino or Raspberry Pi. Using these platforms to measure illuminance is useful because programming and interfacing with a computer is simple and the photo-resistors are very affordable. In addition, it is possible to use the light sensor in tandem with other data collection hardware. However, a system like this would not be very accurate or user-friendly.

Amazon has a lot of consumer light meters that are typically used for photography. They’re all compact and easy to use, with data appearing on-screen in real time, and all have a reasonably good refresh rate of a few hertz. These would likely be best used for comparing relative brightness between rooms indoors, but most have a wide range, so outdoor use is also an option.

As a matter of fact, we actually sell a light sensor as part of our enDAQ sensors. It uses an Si1133 photodiode, and logs illuminance data on the device along with acceleration, temperature, pressure data. Because illuminance has the candela as a base unit, measurements of light need to be adjusted to account for non-visible electromagnetic radiation. The Si1133 does this by measuring the infrared light separately and using it to properly adjust the illuminance data. The enDAQ sensor’s light sensor also measures the UV index in addition to visible light.

Light sensors are some very versatile, affordable components with a lot of potential applications. How are you planning to use light sensors? I would love to hear your ideas in the comments.

Jackson Morgan is a summer intern here at Mide Technology. Jackson is a rising junior at Utah State University, where he is majoring in Electrical Engineering and is a part of the USU Honors program. His extracurricular interests include cooking, politics, and traveling.